10 of the Best Aquariums Around the World

Aquariums take travel to the next level. Beneath the surface and under the sea, whole new worlds are revealed. Luckily, travelers can discover marine life without a wetsuit and an oxygen tank.

Whether you enjoy watching huge schools of fish swim by, petting marine life, or catching a dolphin show, we’ve put together a list that covers all this and more at aquariums across the world. Now, let’s dive into what we believe are 10 incredible aquatic experiences. 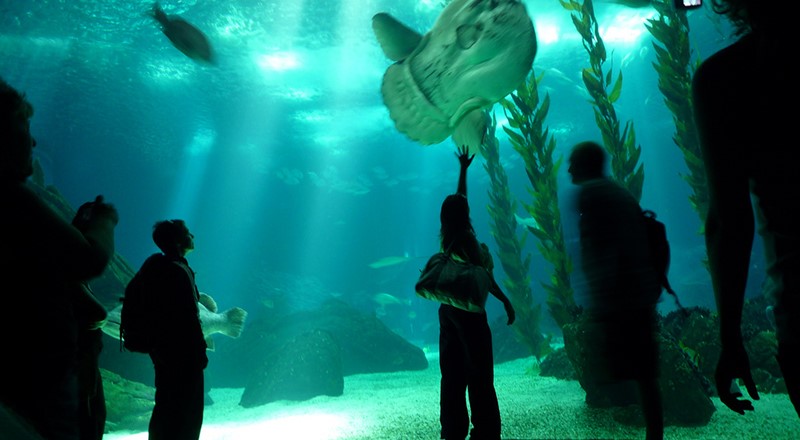 High fives all around at Oceanário de Lisboa. Photo courtesy of Froggymay, Flickr.

Ranked the world’s best aquarium in 2015 by TripAdvisor, this aquarium will entertain the entire family. Oceanário de Lisboa is one of the largest indoor aquariums in Europe, holding about 1.3 million gallons of water, 16,000 animals and 450 species. See everything from sea otters to seagulls, penguins, stingrays, jellyfish, penguins and more. Not enough? Brave visitors can even Sleep with the Sharks. For Club Travelers staying at the Hilton Vilamoura Club, Lisbon is only a short 2.5-hour drive from the resort. Make a day out of it and grab dinner in the capital city. 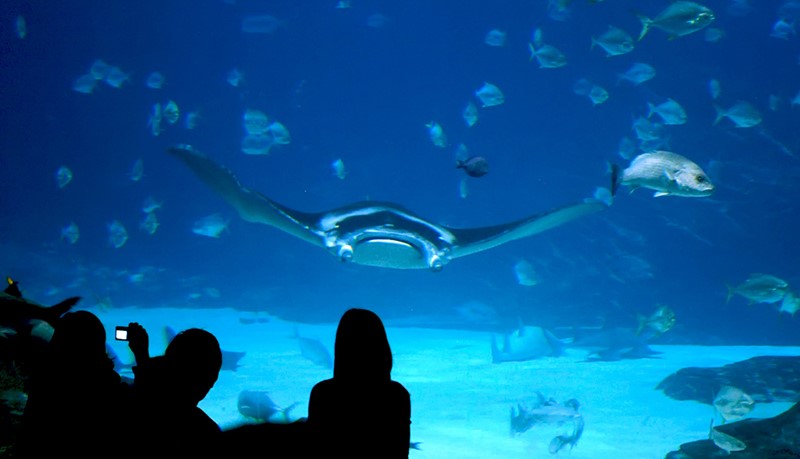 A Manta Ray swims towards its visitors at the Georgia Aquarium -- the only aquarium in the U.S. to exhibit Manta Rays -- in Atlanta, Georgia. Photo by Steve Harwood, Flickr.

Head down south to Georgia and you’ll find a lot more than peaches. In the state’s capital, Atlanta, travelers should definitely make time to visit the largest aquarium in the U.S. Head to the 6.3 million-gallon tank featuring the Ocean Voyager exhibit and explore the creatures of the ocean, from sawfish to whale sharks. Be sure to check the aquarium’s calendar, too, especially if you’re planning a visit over spring break. You won’t want to miss the family- and fish-friendly events, such as Superhero Day, where kids under 12 who dress as a superhero will be admitted for free. They’ll also get a chance to become a superhero of the ocean with events and activities during the day. If you can’t make the aquarium during the day, save money and still see lots of sea creatures during Imagination Nights. 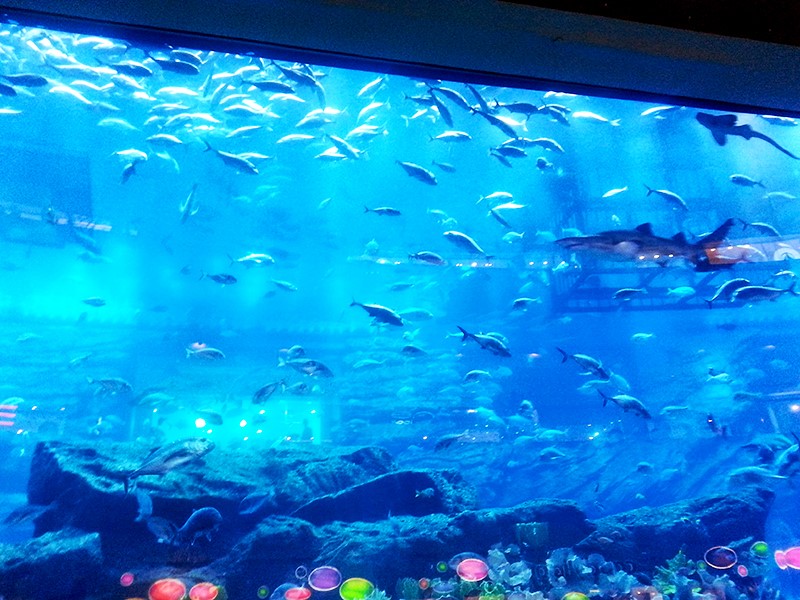 Located inside the Dubai Mall, shoppers pass by the enormous windows and peer into the world under water. Photo by Lisa Zimmermann.

While strolling through the largest mall in the world, the Dubai Mall, shoppers, tourists and locals won’t be able to miss the sharks, stingrays and other fish swimming around as they pass from one shop to the next. Enclosed in a huge glass aquarium inside the mall, passersby can see much of what is offered for free. Pay extra to walk through a glass tunnel where you’ll be surrounded by sea life and visit the Underwater Zoo, where you can meet King Croc, an Australian crocodile measuring nearly 17 feet long and weighing more than 1,653 pounds. 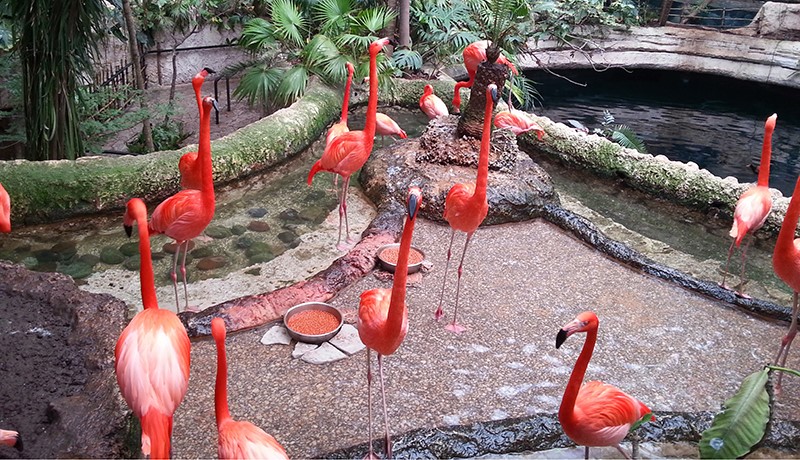 These flamingos are taking a timeout to cool off in the Dallas World Aquarium's rainforest. Photo by Lisa Zimmermann.

Visitors won’t just be exploring aquatic creatures at the Dallas World Aquarium; they’ll also be taking a trip to the rainforest. From cute otters and penguins to giant manatees and glowing jellyfish, you’ll see plenty under and around the water at the Dallas World Aquarium, but that’s not all. See monkeys swing, flamingos splash and jaguars prowl. After you’re finished with your adventure, grab a bite at one of the three restaurants in the aquarium. 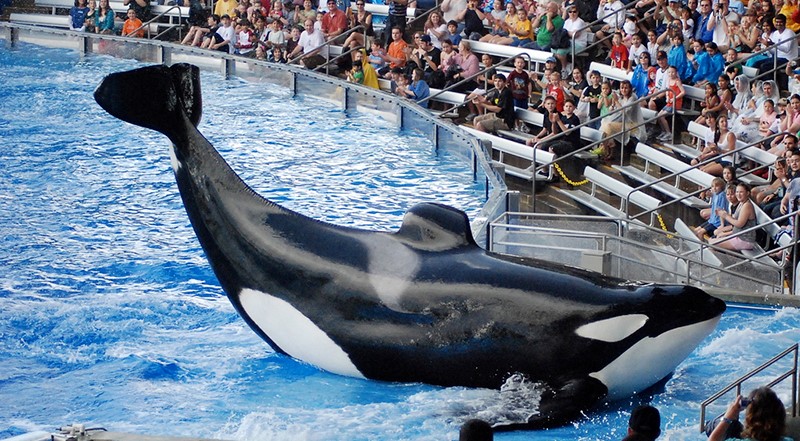 This Shamu is showing off his tricks at the Orlando SeaWorld. Photo by Josh Hallett, Flickr.

We’d be remiss if we didn’t include SeaWorld on our list. Though not exactly an aquarium, SeaWorld offers its guests hugely exciting aquatic experiences, and the Orlando location is just a stone’s throw from Hilton Grand Vacations Club at Seaworld. Known for its marine animal shows with dolphins, killer whales and more, the theme park is an adventure for the whole family. Bring a towel, or clothes that dry quickly. Some of these animals weigh up to 9,000 pounds, which means they’re capable of making some pretty big splashes. 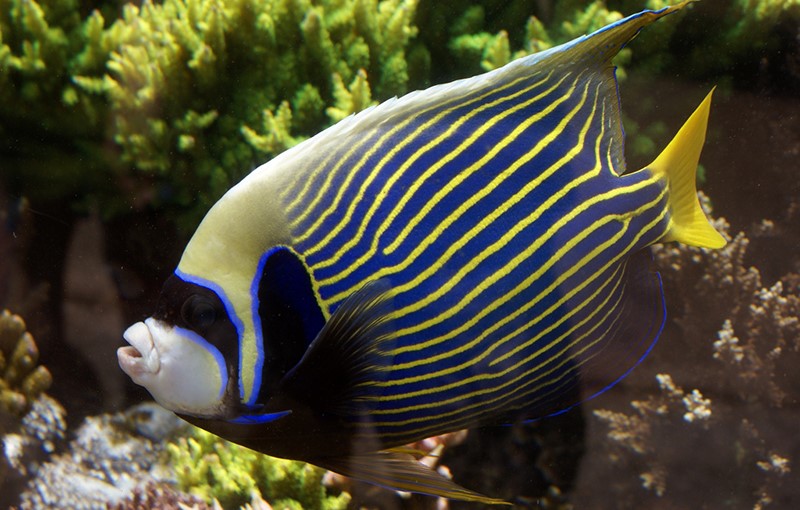 On the shore of Waikiki Beach and just across from Kapiolani Park stands the United States' second-oldest public aquarium. Founded in 1904, Waikiki Aquarium is now home to more than 500 marine species, with more than 3,500 marine specimens. Unique to this aquarium is its emphasis on the aquatic life of Hawaii and the tropical Pacific. 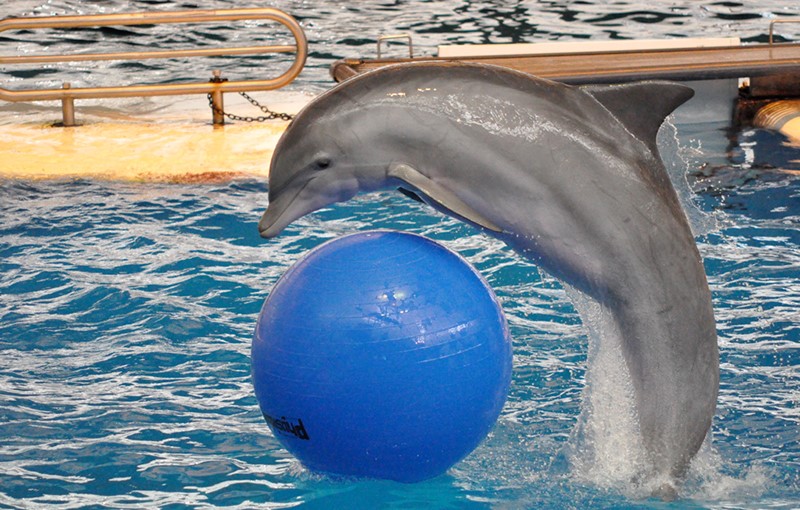 This dolphin is having a ball at the National Aquarium in Baltimore, Maryland. Photo by Ted Matherly, Flickr.

Get ready to make some new friends at the National Aquarium in Baltimore, because your ticket includes opportunities for kids and adults to pet some of its marine residents. Not only that, visitors can learn the tricks and signals dolphin trainers use and perhaps even inspire some young’uns to dream of being a marine biologist or marine trainer. All this is in addition to the more than 16,000 creatures and animals kids will enjoy, from puffins to sloths to American bullfrogs. While you’re there, check out one of the aquarium’s 4D immersion films to experience the sights, sounds and smells of the sea. 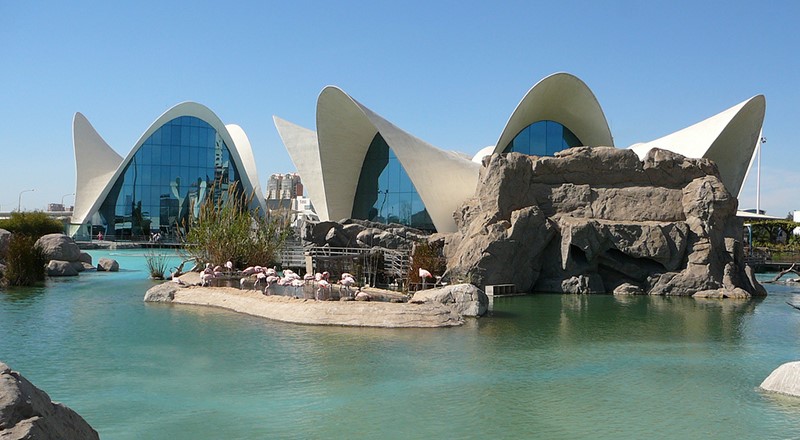 The exterior of L’Oceanographic in the City of Arts and Science, Valencia, Spain. Photo by the noggin_nogged, Flickr.

As beautiful on the outside as it is the inside, L’Oceanogràfic is home to the largest tank in Europe. The 1.85 million-gallon tank showcases more than 45,000 marine species and includes a dolphinarium. Designed by architect Félix Candela as well as structural engineers Alberto Domingo and Carlos Lázaro, visitors will not only get to observe a variety of fish, but also rays, sharks, penguins, walruses and more. 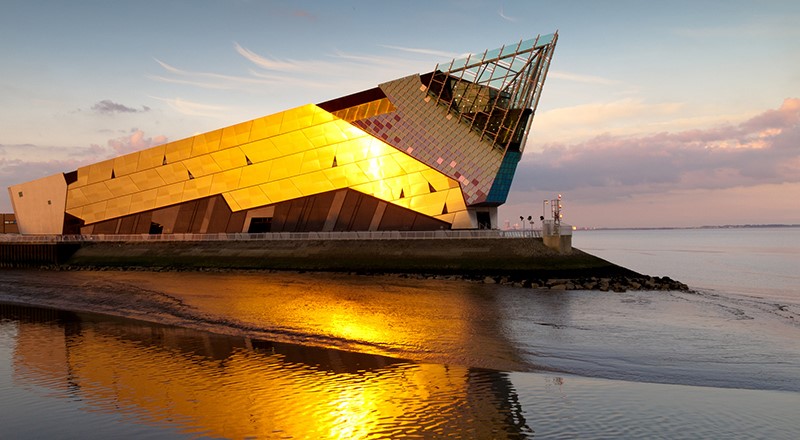 The Deep at golden hour in Hull, England. Photo by Ralph, Flickr.

Named the “world’s only submarium,” The Deep is a center for marine research. The public aquarium is located at Sammy’s Point by the River Hull and features thousands of sea creatures. Explore the “lagoon of light,” “bug champions” and the “secrets of slime,” and even check out the ice kings, also known as penguins. 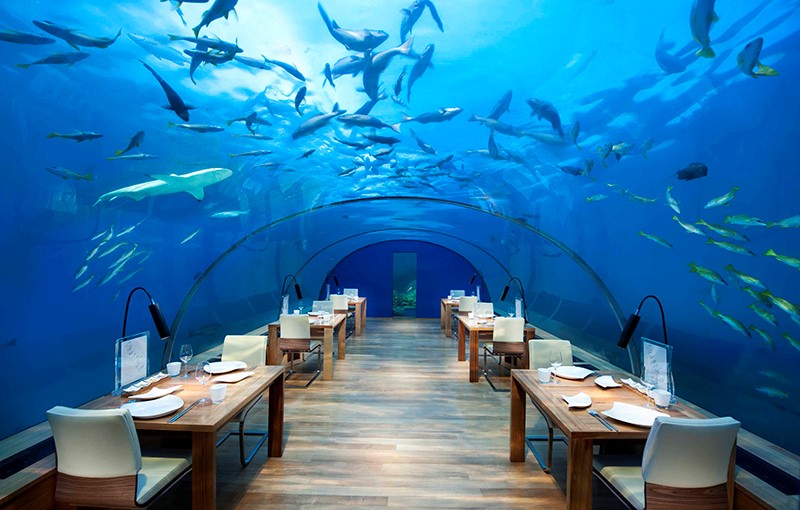 Hilton’s Conrad Maldives Rangali Island is home to Ithaa, the world’s first and only undersea restaurant. To enter the all-glass restaurant, travelers will go through the world’s largest aquarium tunnel. Once seated, enjoy a meal in this magical spot under the sea and take in views of the Indian Ocean’s exotic and beautiful marine life.

*The school of sting rays image appearing at the top of this article was taken at the Georgia Aquarium in Atlanta and is courtesy of Doug Pieper, Flickr.