Every year during Oktoberfest, the capital of the German state of Bavaria, Munich—or München in German—attracts 5 million to 6 million people. The festival began in 1810, in celebration of Prince Ludwig’s marriage to Princess Therese von Sachsen-Hildburghausen. The first festival ran six days and was such a public success that the couple decided festivities should continue every year. And they have, both inside and outside of Germany.

The Munich Oktoberfest always lasts 16 days, running this year from Sept. 17-Oct. 13. But you don’t have to go to Munich to get a taste of the German tradition. Here are a few others to check out during your fall travels.

For nearly half a century, the capital of Colorado has been celebrating Oktoberfest with German music, dances, food and beer. Try a strudel, buy a souvenir stein to refill, and enjoy autumn weather in the Centennial State. Best part? The event is entirely free to enter.

Where to stay: Valdoro Mountain Lodge in Breckenridge

Occurring in November, later than most Oktoberfest celebrations, this German festival in the Texas Hill Country is no less special. Enjoy dancing, carnival rides, games, music, Alpine and Bavarian entertainment and beer of both the German and Texas varieties. Adults can enjoy a sausage and a brew while kiddos can take a turn on the fest’s rides.

Where to stay: Hilton Garden Inn in New Braunfels 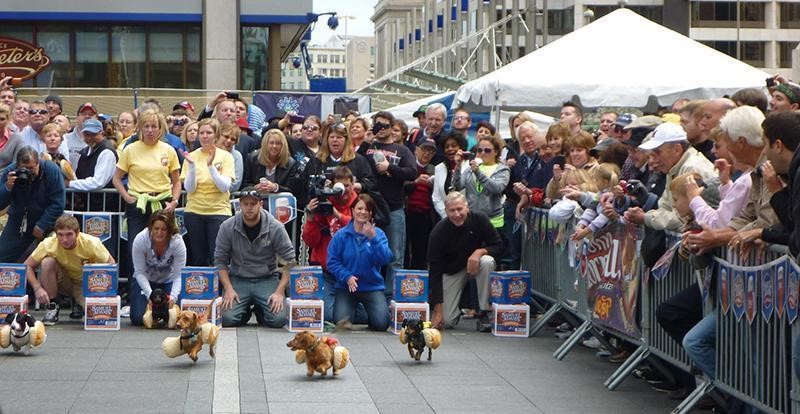 Said to be among the largest Oktoberfest celebrations in the U.S., attracting around 500,000 people, Zinzinnati features German dancing, food and entertainment, and kicks off with the running of the Wiener dogs. One hundred dachshunds, sporting adorable hot dog costumes, will race to be crowned champion. Can you handle this cuteness overload?

Oktoberfest by the Bay

Head to Pier 48 to celebrate the German festival with traditional German foods, beer, live entertainment and dancing. With the Bay as your backdrop, enjoy a brew and the headlining 21-piece Chico Bavarian Band.

Where to stay: Club Donatello in the heart of San Francisco’s Union Square

*The photo featured at the top of this article was taken at Oktoberfest in Munich, Germany. Photo by Mia Martins, Flickr.