We asked; you shared. Club Members sent in photos from their summer adventures, and we saw lots of sunshine, sand, smiles and even a few four-legged, hard-shelled reptiles. We’re talking about turtles, of course! As we welcome the second full month of fall, Club Traveler takes a look back to some of Club Members’ warmest summer and spring memories.

very year Club Member Mike Garland vacations with his wife in Stuart, Florida, where they’ve stayed at Plantation Beach Club at Indian River Plantation Resort since its opening in the 1980s. “To date my favorite thing to do is to walk down to the beach in the early morning with a cup of coffee and watch the sun come up,” he says. “There’s no better way to start a day.”

On a different beach, in a different state, Club Members Charles and Linda Zanders (featured to the left) vacationed in Myrtle Beach this summer, staying at Ocean 22 by Hilton Grand Vacations Club. Charles says that he and his wife also enjoyed early morning walks on the beach as well as the resort’s spacious rooms – noting that they used the kitchen almost every day.

“The property was absolutely beautiful, with easy access to the beach,” Charles says. “The pool bar staff was friendly, even suggesting a new or specialty beverage to try.”

The couple did everything from golfing to going on a river cruise. “It was relaxing and romantic,” Charles says. “We will definitely be back again next year.” 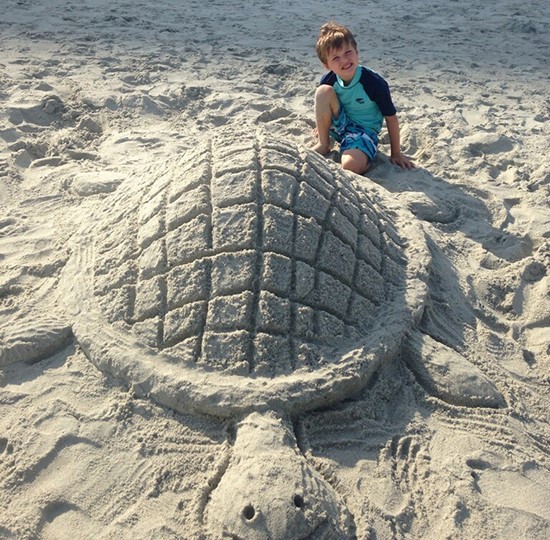 Also in Myrtle Beach, Lesley Hyde’s son Colin enjoyed playing in the sand and discovering a giant sand turtle during the family’s second visit to Hilton Grand Vacations Club at Anderson Ocean Club. For six nights, the Hydes stayed in a room overlooking the ocean. “We loved the rooms and the amenities that the resort offered, [and] my son loved the lazy river,” Lesley says.

The Hydes shopped, dined at seafood restaurants, swam in the ocean, rode the Sky Wheel and went to the Pirates Voyage Dinner & Show in Myrtle Beach. They also made the 1½-hour drive to Charleston to tour antebellum homes. “It was just an amazing time,” Lesley says. 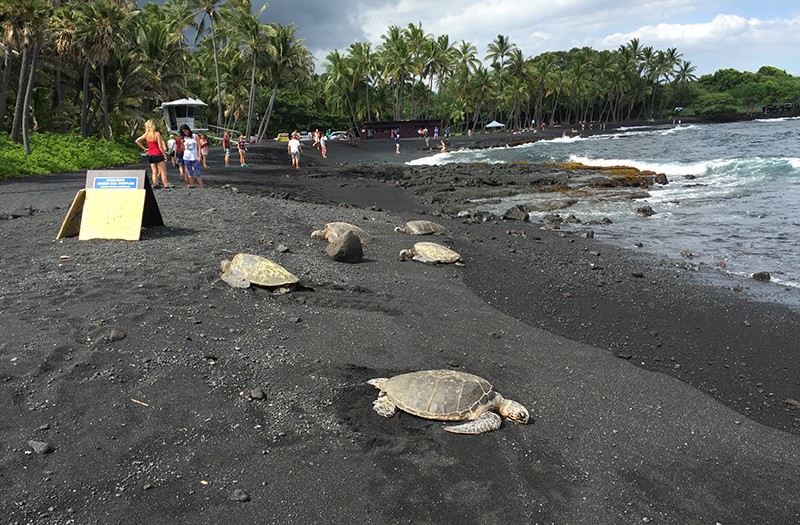 Club Member Steven Schopp explains that the big yellow sign reminds everyone to give the turtles their space. Photo courtesy of Steven Schopp.

More than 4,500 miles away in Hawaii, on the sands of Punaluu County Beach Park on the Big Island, Club Member Steven Schopp also spotted some turtles—five to be exact. The Schopps were staying at Kings’ Land by Hilton Grand Vacations Club and were on an all-day tour, arranged by the resort, that also included volcano visits during both the day and the evening.

“Five turtles was a good sighting!” Schopp says, noting that “the variety of landscapes on the Big Island, from lush green to lava rock and white to black sand beaches, is truly amazing!”

Where Have You Been Lately?

Email us your vacation photos and memories at [email protected] for a chance to be featured on Club Traveler’s website and social channels.